I first met Liana through our former mutual publisher and knew her as a writer of incredible romance stories. My faith in her talent was rewarded when she signed a deal with HarperCollins for a 3 book series.  I wasn’t even a little surprised that it was for their Voyager Imprint which specialises in Fantasy and SciFi *grin*. I was delighted therefore when she approached me about a tour for book 1 in the series, The Day Before.

I discovered that being published by a “big” publisher isn’t necessarily as glamorous as it sounds… in many ways, an imprint author is still an indie author, expected to promote their work vigorously and to assist in ensuring the success of the book in much the same way as self-published or indie press published authors would.  This book sounds so intriguing though that I don’t think it’ll take too long before she has legions of fans in this genre.

A body is found in the Alabama wilderness. The question is:
Is it a human corpse … or is it just a piece of discarded property?

Agent Samantha Rose has been exiled to a backwater assignment for the Commonwealth Bureau of Investigation, a death knell for her career. But then Sam catches a break—a murder—that could give her the boost she needs to get her life back on track. There’s a snag, though: the body is a clone, and technically that means it’s not a homicide. And yet, something about the body raises questions, not only for her, but for coroner Linsey Mackenzie.

This case might be the way out for her, but that way could be in a bodybag.

A thrilling new mystery from Liana Brooks, The Day Before will have you looking over your shoulder and questioning what it means to be human. 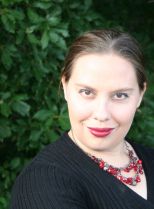 Liana Brooks once read the book GOOD OMENS by Neil Gaiman and Terry Pratchett and noted that both their biographies invited readers to send money (or banana daiquiris). That seems to have worked well for them. Liana prefers strawberry daiquiris (virgin!) and will never say no to large amounts of cash in unmarked bills.

Her books are sweet and humorous with just enough edge to keep you reading past your bedtime.

Liana was born in San Diego after bouncing around the country she’s settled (temporarily) in the great wilderness of Alaska.

With an asthmatic wheeze the engine died. It figured. Stuck in a man’s craw, it did. This truck had been his daddy’s and his pappy’s, and before the Commonwealth government forced him to replace the diesel engine with the newfangled water doohickey, he was certain he’d pass the truck onto his son.

He’d been playing under the hood of trucks since he was six and now he was stranded. Embarrassing, that’s what it was. He climbed out of the cab to check the engine out of habit. The ice blue block of modern fuel efficiency stared back. Three hundred bucks it’d cost him, straight from his pocket.

Oh, there was a government subsidy, all right. A priority list. Major Population Centers, they said. Unite the countries of the Commonwealth on a timeline, they said. And what did all that mean?

It meant the damn Yankees got upgraded cities and free cars before the ink was dry on the Constitution and what about the little man? Nobody thought about the working class. No one cared about a man covered in oil and grease anymore.

He thumbed his cellphone on. No reception. Figured.

So much for the era of new prosperity. He’d hoof it. There was a little town about five miles down the road where he could call Ricky to bring a tow truck. It would have been cheaper to pay the diesel fines than get all this fixed.

Off schedule. Over budget. Son of a –

He stared at the distant trees. Well, it wasn’t going to get any cooler.

He grabbed his wallet and keys from the cab of his truck. The tree line looked like a good spot to answer a call from nature, then he’d see if there weren’t a shortcut through to town. A meadowlark sang. Not a bad day for a hike. Would’ve been better if it weren’t so dammed hot, but at least the humidity was low. He wouldn’t like to walk in a summer monsoon, not at his age with arthritis playing up.

Under a sprawling oak he unzipped his pants. As an afterthought, he glanced down to make sure he wouldn’t stir up a hill of fire ants.

A hand lay next to his boots.

He blinked, zipped his pants slowly, and turned around. “Hello?”

“Are you drunk?” The quiet field that looked so peaceful only moments before was now eerily sinister. He nudged the hand with his foot. It was swollen and pale and crusted with blood, just like a prop out of a horror movie.

Maybe it was a good idea to run to the next town.